"Domestic" bliss to Busuanga via Seair

The threat of typhoon Ofel did not diminish our resolve to visit Coron with our community organizing consultant and documentarist, Allan Lumbo. Against the advice of our respective families, we still pushed thru with it and were glad that we did. 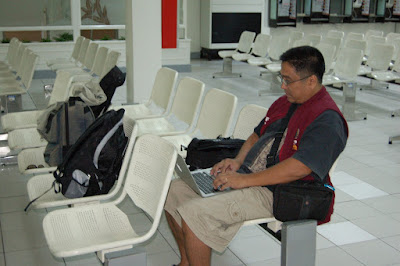 It was eerie to find ourselves with only less than fifty people at the old domestic terminal. So many empty seats. Unlike the good old days when we were barraged with verbal abuse from irate mobs of complaining passengers due to delayed or cancelled flights of Asian Spirit.
Now, it is only Seair and Asian Spirit that use this terminal after Cebu Pacific transferred to NAIA 3 a few months ago. 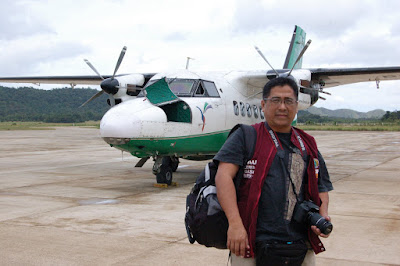 We were fortunate to make it to Busuanga that day via Seair's Let 410 unlike the group of former Businessworld editor Mike Marasigan and other guests of 7,107 Islands whose PAL Express flight in the morning (Sept. 25, Thurs) was cancelled. It was good that they were offered a free stay at the Century Park Hotel. This group included the QTV 11's Izza Litton. Tim Yap of Phil Star was a no show.
Unfortunately, their jinx continued till the next day (Sept. 26, Fri) when they were already in Busuanga but had to fly back to Manila because the pilot did not want to risk landing in poor visibility. For pilots who are new to the terrain and destination, it is better to err on the side of safety. The Francisco Reyes airport in Busuanga was upgraded with a new terminal building and a paved runway courtesy of the development agency of Korea. This looked much much better than the old "airfield" which we flew out of in 2006.
Overall, it was a safe and comfortable flight to Busuanga. Thanks to Seair and Patrick Tan :-)
Posted by ideasman at 11:53 AM