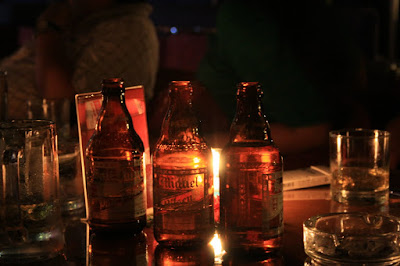 I am ashamed to admit that I had a negative mindset about Koreans ... that is before I met and enjoyed the company of 3 Koreans in our fam trip to Coron, Palawan which was made especially enjoyable by our gracious hosts Stevie Tajanlangit, Amor Salud, Ed Reyes, Dino Bautista and Alex Javellana of 7,107 Islands Cruise.
I found the 3 Korean travel agents to be very sincere, sensitive to the needs of others, and fun to be with. Para din tayo. I told Stevie that they are even more hospitable than us. Imagine ... they were the ones serving us instead of the other way around since they were the foreigners here in our country. We, Filipinos, pride and even promote ourselves as the most hospitable people, and yet, we were not doing what these people were doing to us in a very natural and heartfelt way. 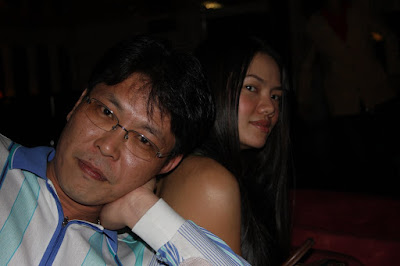 Alex Moh, who owns Base Camp Travel agency and Calachuchi restaurant here in the Philippines, is my first Korean friend. He was very friendly and accommodating. Always reaching out to other people. You could see and sense that this man has a kind heart. He made me and Allan Lumbo at ease and comfortable with their group. He was always asking how you were --- not in a mechanical way -- but in a sincere way each time. 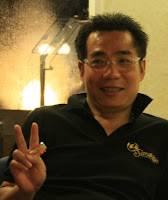 Jesse or Koh Jin Kook, managing director and in-charge of marketing for A.S.K. Marketing & Sales based in Korea. The "best friend" of Allan. Jesse was the de facto leader of our group ... the life of the party ... a take charge guy.
He made us laugh ... he made us drink ... he made us dance!
Not a single dull moment. Even when he had a hangover and lacked sleep he was still fun to be with. Very, very funny. He was the most hospitable, always checking if you still had a drink, pouring the beer once it arrives, etc ... A person of great cheer and character.
Much to everyone's surprise he returned more than $800 dollars of bets he won in a game of blackjack aboard the banca on our way home to the cruise ship from wreck diving. 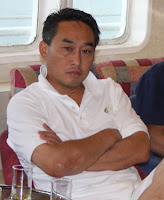 Shin Jung-Ho is also managing director of A.S.K. Marketing & Sales. Mr. Shin, as we call him, is in charge of sales and reportedly is very good at it.
He is the silent type among the 3. But he had so much fun dancing "running man" cum "itik-itik" with Daren and Jane at disco time at the cruise ship on our second night.
We had so much fun watching Jesse beat the hell out of him in black jack ... and see him once again dipping into his wallet for US$ 100 bills. He was smiling all the time while losing more than a thousand dollars.
He is the type who "goes for the gold" and wins it ... but not this time.
The 3 Korean travel agents were guests of Dennis Javellana, chief mktg officer of 7,107 Islands Cruise. It was their first time in Coron but it is not definitely their last.
They put together a package targeting tour groups and honeymooners in Korea that will leave Batangas via the cruise ship, sail to Boracay, then to Coron for 2 days, then fly back via Seair.
For those interested, you may call:
Alex Moh of Base Camp, tel. (632) 5217181
Stevie Tajanlangit, (632) 7528255 to 57
Posted by ideasman at 10:22 AM