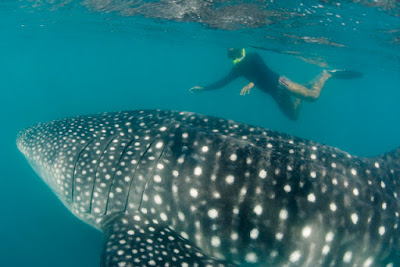 The butandings of Donsol. The Ivatans of Batanes. The rice terraces of Banawe. Coron Reef of Palawan. The white sands of Boracay. The heritage town of Vigan. The Hundred Islands of Alaminos. The tarsiers of Bohol.

The Great Provider that He is ... God has blessed us with such an abundance of natural resources that there is enough for everyone to live by. Why then is there still so much hunger and deprivation everywhere?

We live in a finite planet. And, if we do not learn to share and nurture what we are blessed with it will be a “tragedy of the commons” repeated over and over again.  The tragedy of the commons is a metaphor that illustrates how free access and unrestricted demand for a finite resource ultimately dooms the resource through over-exploitation.  This occurs because the benefits of exploitation are enjoyed by a few to the detriment of the greater good. This, in turn, causes demand for the resource to increase until the resource is exhausted.”

In the Philippines, the sustainability of ecotourism is endangered by local communities largely dependent on illegal fishing/logging and other acts of environmental degradation for their hand-to-mouth existence and survival.

One of the solutions to this serious problem is to make ecotourism replace illegal and destructive forms of livelihood. Nature + Nurture.

Ace Durano, Secretary of the Department of Tourism, explains, “This advocacy should be done with urgency, commitment and universal appeal. In short, there is a race against time to make the ‘destroyer’ become the ‘protector’ of nature.”

But how do we make the local community that rapes the environment be the same local population that protects our country’s natural assets and attractions?

“The first step is to level the playing field by giving the local community easy access to skills, capital, market opportunities and values formation,” says Durano.

With this in mind, the Department of Tourism launched twin programs to help these local communities and their natural assets become environmentally-sustainable, economically-viable and socially-equitable so they could better promote and safeguard their respective ecotourism sites.

The Grassroots Entrepreneurship and Employment in Tourism, or GREET Program, was conceptualized by President Gloria Macapagal Arroyo to enhance livelihood opportunities for ecotourism communities and its young entrepreneurs after her visit and interaction with the whale sharks of Donsol in 2006.

In rationalizing the GREET program and its mandate to award grants Arroyo stated, “We came up with the GREET program because we, Filipinos, smile a lot, greet a lot, and always welcome visitors with ‘Mabuhay.’ The pioneering spirit is so alive in our youth that many of them want to be explorers, guides, and trailblazers. This fund can help them realize their dreams and generate interest in undiscovered treasures that dot our beautiful land.”

Arroyo believes that God has gifted us with spectacular nature sites that we don’t have to build multi-story buildings to draw in tourists. And there is a big tourism market that sojourns to areas unspoiled by commercial development.

She attests, “Donsol which I have just visited is only a sample. We still have many Donsols, plenty of Boracays, Siargaos and El Nidos waiting to be discovered in the Philippines. In these beautiful places, a single umbrella, one banca, and a simple hut make for an unforgettable experience. This is our competitive advantage. Other countries may have infrastructure muscle, but powerful and rich as they are … they can’t craft synthetic sunsets or artificial marble sands.”

Turismo Mismo, on the other hand, is an advocacy program that underscores the role of tourism in uplifting the lives of the local populace. Townsfolk in rural areas are prone to experiment on empty promises of the different ideologies in their search for answers to a better life. So they become easy prey to community organizers of different fronts for communism, socialism, and other isms but eventually end up hard-pressed and in a worse situation. Fortunately, many of these rural areas have natural assets in their midst that can become the answer in their search for a better life if managed properly.

“Our message to them is ‘Turismo Mismo!’ --- Tourism is the key to a better life, not the other isms,” asserts Durano.

The sleepy town of Donsol, Sorsogon struggles to maintain balance between embracing progress and preserving its heritage.

Donsol is endowed with a hilly and rolling terrain, making the people thrive in the production and export of rice and copra, making Donsol a major food supplier in the area.  Not to be outdone are the abaca and hemp industries, supplying high grade products such as rope and paper.  Added products from these natural resources are handicrafts and souvenirs for Donsol’s tourists.

Nature has also blessed Donsol’s waters, making it a home for multiple fish species and marine mammals.  These waters continuously feed Donsol’s inhabitants by providing tons of fish per year, which the people use for subsistence, and also sell for added income.

The Donsol seas are also home to one of nature’s most absorbing creatures, the Whale Shark or “Butanding” (Rhincodon typus).  Donsol is also known to have the most number of Whale Shark sightings in the world, thus making Donsol “the Whale Shark Capital of the World”.

“People in this town have known about the whale sharks for generations but paid little attention until marine biologists monitored the behaviour of the overwhelming number of these giant creatures,” said Allan Amanse head of the Butanding Interaction Officers (BIO).

Large but gentle, and thoroughly enchanting, the Whale Shark attracts a large number of tourism and environmental visitors to the area, again providing Donsol residents added revenue and tourism potential.

“The fishing village was suddenly flooded by divers and tourists who wanted a glimpse of the world’s largest fish,” Lamberto Avisado Jr., president of the Butanding Boat Operators Association (BBOA) reminisced.

Donsol is also gifted with hectares of mangrove forests as well, providing habitat for a diverse collection of swamp species; further testament to the vast natural biodiversity of the area.  These mangrove forests are an added tourist attraction in itself, on account of the fireflies which have made the mangroves their home.  At night, the natural light emitted by millions of fireflies illuminate the mangrove line, in yet another simple yet fascinating display of nature’s beauty.

Donsol, however, is not without its share of problems.

Located along the Philippines’ typhoon belt, Donsol almost always experiences the wrath of every typhoon that passes the Philippines.  After such storms, the people of Donsol struggle to rise from the destruction brought about by floods and strong winds.  During this time, the fishing is difficult, and the Butanding which attracts the tourists temporarily moves to calmer waters.

Thus the tourism which adds revenue and life to Donsol becomes a seasonal matter, almost non-existent during the stormy months.

In addition, the people are forced to survive on reduced resources, as everything from food supply to the raw materials needed for Donsol’s industries are depleted by the storms.

In November 2007, the Department of Tourism (DoT), through the Philippine Convention and Visitors Corporation, launched the Turismo Mismo! Advocacy campaign for sustainable ecotourism by awarding GREET Program grants. The BIO received 10 sets of diving suits and other paraphernalia. While, the Tinanogan Mangrove Planters and Fisherfolk Association received an initial batch of 15,000 seedlings/propagules from the Department of Natural Resources (DENR).

The BBOA led by Avisado received assistance in the form of boat improvements for the 41 fishing boats so it can accommodate tourists for the peak season. Wooden seats, wooden flooring, and tarpaulin roofing were installed to make it more comfortable and safer for tourists. Propeller guards crafted from stainless steel and fiberglass were also installed to protect the whale sharks from getting clipped and wounded by the rotating propellers. The DOT also subsidized the expenses for Maritime Industry Authority (Marina) to issue special permits for the boats to operate as passenger vessels during Butanding season, and licenses for the boat captains and mechanics.

Avisado was also awarded a substancial amount for his proposed Firefly Watching and River Cruise Services where he hopes to replicate the experience of cruising and dining along Loboc river.

Ma. Theresa Bernaser and Allan Amanse were awarded individual grants to pursue their entrepreneurship thru handicrafts and souvenir items.

Bernaser added, “Donsol is very fortunate to have been chosen as the pilot area for Turismo Mismo!. Rest assured that you can count on us to spread and share the seed of hope for a better life which you planted here in Donsol.”

Prior to the launch, more than 200 residents composed of boatmen, members of BBOA & BIO,  mangrove fisherfolk and other tourism frontliners underwent a series of workshops to enhance their skills and capability in handling tourism products and services. Modules included the Value of Tourism, The Culture of Excellence, Disaster Management, Emergency Response, and Sanitation.

Turismo Mismo! shows the people of Donsol the importance of sustainable tourism as the avenue for progress to the future.  Since nature has provided Donsol with both boon and bane in its shifting seasons, the people have to cope.  The only constant and unchanging value which the people hold is what they have in themselves -- the friendly, warm, and hospitable spirit that the Donsoleños have, typhoon or no typhoon.

As sustainable eco-tourism is thus the future for Donsol, the DoT through the Turismo Mismo! program and its program partners, e.g., Department of Trade & Industry, Department of Health, DENR, Marina, the provincial government of Sorsogon & its disaster coordinating council, the municipal government of Donsol, Cottage Industry Technology Center, Philippine Trade & Training Center, the Design Center of the Philippines, the Technological Resource Center, Smart Communications, Philhealth, Mercury Drug, and Philtranco, continuously supports the area, with the final aim of making the Municipality a shining example of what the people, with proper government and private sector support, can achieve.

Bringing the good news about tourism to other parts of the country, Durano has also awarded several grants to Cebu, Bohol, Negros, Siargao and Butuan.  Taal and Pagsanjan are next.

As the good news of tourism spreads and successfully converts more destroyers into being protectors of the environment, it is hoped that the Nature + Nurture advocacy campaign for sustainable ecotourism proves that there is indeed a better way to a better life. Our battlecry, “Sagot sa Kahirapan --- Turismo Mismo!”

2. Some paragraphs were written by Leo Tanseco